Technological progress plays a crucial role in driving economic growth, as it stimulates competition and it fosters increasingly efficient ways to produce goods and provide services.

But how about the threat that technology, robots and machines will destroy people’s jobs? Can new technologies be the root cause of global conflict and massive unemployment in the years to come?

That’s a question the humanity has asked itself for centuries. The battle between man and machines goes all the way back.

•  Before the industrial revolution, the vast majority of the world’s workforce worked on farms. The invention and proliferation of technology, however, made it possible for a small minority of people to provide food for all. But did humanity “lose jobs” then?  No, jobs changed, as an increasing number of people moved to manufacturing.
•  In recent years, the number of factory workers in manufacturing has been falling sharply, as machines take on most, if not all, of the repetitive heavy labor. One factory in China, for example, has replaced 90% of its human workers with robots, a move that has resulted in fewer defects and an increase in production.
•  Today, we are witnessing that self-checkout lines are already found in most grocery stores. And it only takes one or two operators to manage a dozen checkouts, but we have more jobs in analytics and other services that run these new industries!

These are just a few examples of how jobs and the nature of work has changed over time.
And we all still have jobs! Humanity is creating and using all these technological advantages, exploiting the machines for their own good!

So what do you think will happen next?
Will we have enough jobs in the near future or does AI have no choice but to take over? Is this finally the time when the centuries-long threat becomes real and tangible?

A new staff-less AmazonGo grocery shop just opened in the lobby of BDIPlus’ NYC office —it’s got us on the verge of an existential crisis and we are wondering what you all think!

Let us know in the comments below 😉 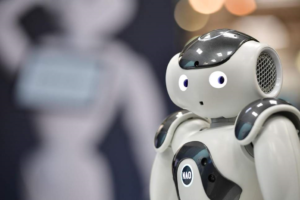